If you tried to imagine how things would be today without mobile phones, applications, and the cloud, it would be quite tricky. The convenience that we enjoy – instant messaging, easy access to files, storage back up, and many others – is made possible by cloud computing.

From the developer's point of view, cloud-based services are incredibly powerful yet extremely challenging to build and maintain. Thankfully, cloud computing providers take a massive load off their shoulders. All the hardware aspects of databases fall under providers to focus on projects instead of infrastructure.

There are several cloud providers in the market, each with their unique lineup of services. One of the most popular is from a tech giant company Amazon called the Amazon Web Services (AWS), which rose to the top ranks of cloud computing providers almost instantly. 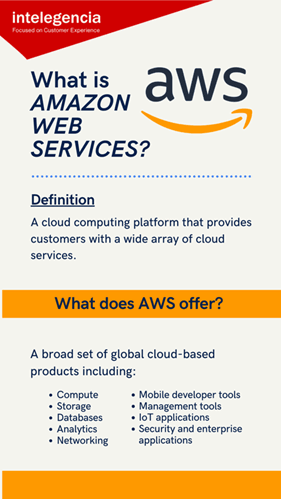 What is Amazon Web Services?

Why should you consider Amazon Web Services?

Since its launch, AWS has spread to over 190 countries across the globe. A considerable number of businesses rely on their services for scaling – making them a tough competitor for Google Cloud.

Their cloud computing infrastructure remains a top choice for businesses for many reasons:

Security. Amazon prides itself on its layered data centers that undergo frequent audits to ensure the utmost privacy and the best security.

Cost-effective. It was a wise move for Amazon to experiment with its pay-as-you-go pricing model, making it one of its bestselling offers to date. The option to subscribe only when needed makes them accessible to businesses of all sizes.

Flexibility. Instead of getting developer teams to adjust to Amazon's systems, it goes the other way around. AWS allows businesses to select the platform they're comfortable with, empowering teams to use their scaling expertise.

To create reliable, consistent, and effective AWS systems, it's crucial to invest in the AWS deployment tools that offer integration with the Amazon cloud.

For developers who find it helpful to build with visuals, AWS CodePipeline is a must-have tool. Amazon describes it as a “fully managed continuous delivery service that helps you automate your release pipelines.” The CodePipeline interface automates building, testing, and deployment phases, making it significantly easier to update features. Another aspect that makes developers love the tool is that its interface displays a visual representation of the code, automatically updating as you go.

Storing code online is nothing new. There are a ton of popular websites like GitHub that serve the exact purpose. However, Amazon introduced its control service called CodeCommit, which teams can use as a repository for their source codes. A winning feature allows developers to clone the codes to their local machines, update the file, and send it back (quite similar to Google Drive or Microsoft One Drive, except there's no option to edit online or live).

Developer teams would be thrilled to work with AWS CodeBuild, a building service that scales and processes multiple builds concurrently. It compiles the source code and runs the test so that developers don't have to manage their servers. By working hand-in-hand with CodeCommit (where codes are stored), CodeBuild runs pre-configured systems on its own.

Another helpful tool in Amazon’s AWS DevOps architecture ecosystem is CodeDeploy, which can be guessed from the name and automates application deployment. It's mainly helpful for developers who want to keep updating and releasing new features to their applications without suffering from downtime. CodeDeploy’s interface is known for eliminating errors typically found in manual deployment processes.

Navneet Kumar is a Sr. software Engineer specializing in AWS Devops at Intelegencia. When he is not working, you can find him playing cricket, singing & doing Roadtrips.